Subjects that don't have their own home
Post Reply
11534 posts

Hey Ant, I know you like your turntable/tonearm/cartridge bargains but have you ever considered something like this?

Dave the bass wrote: ↑
Sat Oct 12, 2019 8:42 pm
We walked to Crayford today and passed a place and noticed there was a blue plaque on the wall, its finally been recognised for its history, whahey!
. . .

That is seriously cool ..

Anyone know anything about bandsaws?

So, upgrade time. I am considering the Charnwood b250 or the Lumberjack BS254.

Open to ideas about other alternatives.

Before I decided to give up making speakers I was considering buying a BS250 Record Power bandsaw. Worth checking out their range https://www.recordpower.co.uk/category/bandsaws
Top

Toppsy wrote: ↑
Tue Oct 15, 2019 6:46 pm
Before I decided to give up making speakers I was considering buying a BS250 Record Power bandsaw. Worth checking out their range https://www.recordpower.co.uk/category/bandsaws

I did look at the BS250 but the reviews I read were not great...

All the manufacturers show a huge lack of originality in naming these products. All are called B/BS (bandsaw) 250/254 (10").
Vivitur ingenio, caetera mortis erunt
Top

Fair enough.
Of your 2 mentioned bandsaws my money would be on the Charnwood though I have no experience of their products. However, I do have a Lumberjack router table cost me near on £180 when I bought it and to be honest the quality is poor and not that accurate to use for consistent results. Used it just the once and ruined some expensive hardwood and have not used it since. Base is a moulded plastic affair and the deck is merely pressed sheet steel that flexes under pressure and was not truly flat. Can't say what their bandsaws are like but based on their router table I wouldn't buy another woodworking power tool from them again.
Top

I had this when I was making speakers:

although if memory serves it was 2hp and it had a stand with a cabinet in it, although that's deffo the same model number.
It was a brilliant machine and I was sad to let it go. A word to the wise though. All bandsaws need a bit of modding to get the blade guide to go up and down absolutely true. Elsewise it's a chore to keep setting the bearings exactly.

The price on the link seems an absolute bargain for that machine. I certainly paid a lot more when I bought mine.

Yes, I can recommend SIP.

diet: whatever you buy make sure it has a 3 bearing guide top and bottom.
There's nowhere you can be that isn't where you're meant to be
Top

Dave the bass wrote: ↑
Sat Oct 12, 2019 8:42 pm
We walked to Crayford today and passed a place and noticed there was a blue plaque on the wall, its finally been recognised for its history, whahey!
. . .

That is seriously cool ..

Yeah, I thought so too, ta.
"One pound of middle cut pork leg joint,
Stew my foot and call me Brenda".
Top

has anybody got a virgin PAYG sim?

yeah, really....I should have posted this in the joke section...

I looked on the interweb and it seems the information email has been around for the last couple of days and there are lots and lots of miserable reports. It took me about 10 mins to recover and phone the three support line with my PAC code....

I just can't imagine the discussion around the project table when this was agreed...I've no idea what the agenda was/is but it doesn't do anything for the customers as far as I can tell...who uses more than 200 minutes per day on PAYG!! well done Virgin!
There's nowhere you can be that isn't where you're meant to be
Top

A smidge under 3.5 hours. I dunno, when I did a long train journey back in June, Boston to Essex, I was staggered how long people spend talking on their phones. On the Fenchurch Street line one guy was on solid right from when he got in and sat down, through us waiting for the train to leave (20 minutes?) then until he got off, pretty much. Upminster? Horndon? Or maybe I got off first (Laindon). And it seemed to be about work stuff, not all personal stuff. Or maybe he was talking to a friend or partner about work stuff, so it was a personal call.

I had a short listening session with a World Designs 6550 push pull amp the other day, and I was pleasantly surprised at the "fullness" of the presentation.

So, today I am reacquainting myself with an old friend, my first amp build, the 832a push pull amp.

I remembered it had a fault last time out (many,many years ago) so I tested it and found one of the 832a was dodgy, so I swapped in a replacement and all seems well. I gave it a once over and removed all the dust and cobwebs while it was on the bench.

So now it's in the main system and playing a few favourites.

I had an amp out for repairs (long story - it went to the UK service centre, sat there for a while, went to Italy to the manufacturer, got fixed eventually) after a firmware update bricked it. Anyway, it's back in the rack now: 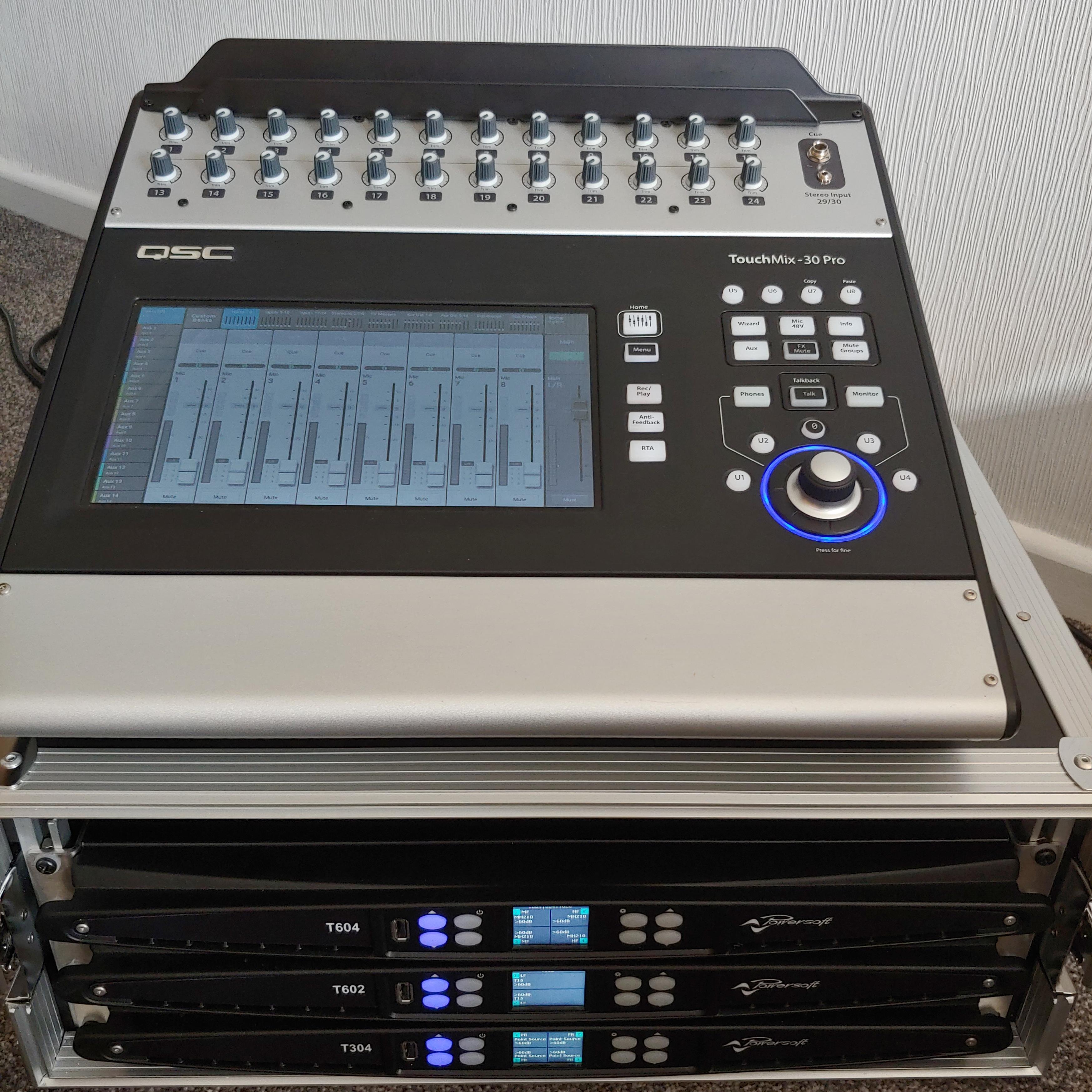 How they get those power levels in a box that big is voodoo to me, but it seems to work. The whole rack weighs less than the 2x2500w Crown amp that came to Owston.

Sitting on top is a mixing desk which also works rather nicely for on-location recording - you can record up to 32 channels (30 inputs plus a stereo mix) straight to a USB solid-state drive (disk drives just aren't fast enough) and mix down later. I've got a few bits of recording work coming up with various bands at Sheffield University, so watch this space.


The most recent recording work (which I'm hoping to be able to share at some point) was with a choir of 14. I set up a few mics around the cathedral (St Marie's in Sheffield) but ended up using the mid/side array for the finished product. The idea there is you've got 2x mics. One points forward and forms the central image, and then there's a figure-of-8 mic which you aim side-to-side, placing the choir in the null. By splitting that signal, panning it hard left/right and inverting the right (negative, since the mic is dipole) side, you can then choose the stereo width just by adding more or less of the "side" signal.

If anyone would like to look them up, the mics were a Beyer MC930 for the mid, and a SE VR1 ribbon for the side.

https://www.ebay.co.uk/itm/4212H-ITT-V1 ... SwMmhdfkCG
Life is what happens to you while you're busy making other plans. John Lennon

"I believe these newer been used"
Wow indeed , how many people could actually implement an amp with these ... £4000 or otherwise ?
"The bass is the king of the instruments - it has no known natural predator" (Wobble)
Top
Post Reply
11534 posts