One thing I didn’t try was to see if there was any air being shifted out of the gap between the two drivers. Wherever it comes from, there’s plenty of it!
Top

Given the amps, it's not FIR. You'll need my Powersoft T-series amps to do FIR processing.

Ali Tait wrote: ↑
Fri Feb 07, 2020 5:38 pm
One thing I didn’t try was to see if there was any air being shifted out of the gap between the two drivers. Wherever it comes from, there’s plenty of it!

No....its completely dead. One guy on LencoHeaven called it 'a phantom baffle'!

Just to be clear.....the woofers are in phase accoustically, but out of phase electronically.

The concept is not totally original, as Celestion had something similar in the 80's with their SL6000 system.

......and if you think its unusual having the sound generated by the rear of the speaker, have a look at Reflector!

Ah yes, forgotten about the Celestion subs- made for Quad stats were they not?
Top

Can't quite get my head round this - what would be the practical difference? How is this done? Must be having end of the week brain fade.
Top

As the drivers face each other then they need to be electrically out of phase so they both move in the same direction in Isobarik function.

One forward and one backwards but both together.

Does that make sense ?

Yep exactly that. One amp runs the L/R rear pair of drivers, the other the front pair, connected out of phase in relation to the rear pair.
Top

Riiiiiight, okay. I hadn't appreciated it was isobarik-like. This makes a lot more sense now.
Top

In extremis, maybe you could get rid of the frame entirely and mount the drive units on cables from ceiling/floor?
Top

I just thought I do a bit of update as Ali might be interested.
I have been chatting with Vic and he has changed the PRV drivers to the 4-inch Faital Pro drivers 4 per channel and 3-inch Faital Pro drivers 2 per channel and is loving them.
Vic has lent me the 3-inch drivers to try out I am using 4 per channel.
They are smoother than the PRV with more detail and depth, However, the biggest change is how effortless they sound. The sense of scale is special.
An addictive listen!

So is Vic using 4 pcs 4” 2 pieces 3” stacked on top?
"Two things are infinite, the universe and human stupidity, and I am not yet completely sure about the universe." – Albert Einstein
Top

Thanks for the update. Do you know how he is running the drivers, any crossover?
Top

During this lockdown I decided to be productive and try out alternative to the PRV's. Blue Aran had stock of Faitals, and they were relatively cheap, fairly efficient and very smooth.....on paper anyway.
Of course, singly they would not match the PRV for SPL (220W & 94db) which makes using multiples (or more than 2/side) a waste, but with the much lower power handling Faitals it would make sense. I decided on a 4/side array of their 3 & 4" units.

The 3" sounded superb. Smoother than the PRV which could sound raucous when certain frequencies were hit. The Faitals sailed through everything, gave extended highs vs the PRVs, but also retained dynamics and sound staging where the PRV excelled. However....having a blast with Man Machine I could smell burning

Next I tried the 4" Faitals (30W). The retained much the same character as the 3". They passed the Man Machine test, but I missed the highs of the 3's. So I combined the array utilising 2 x 3" on top. Ahh.....this gave me everything. No crossover, and a combination of series/parallel wiring gave me correct relative volume outputs padding down the 3's. 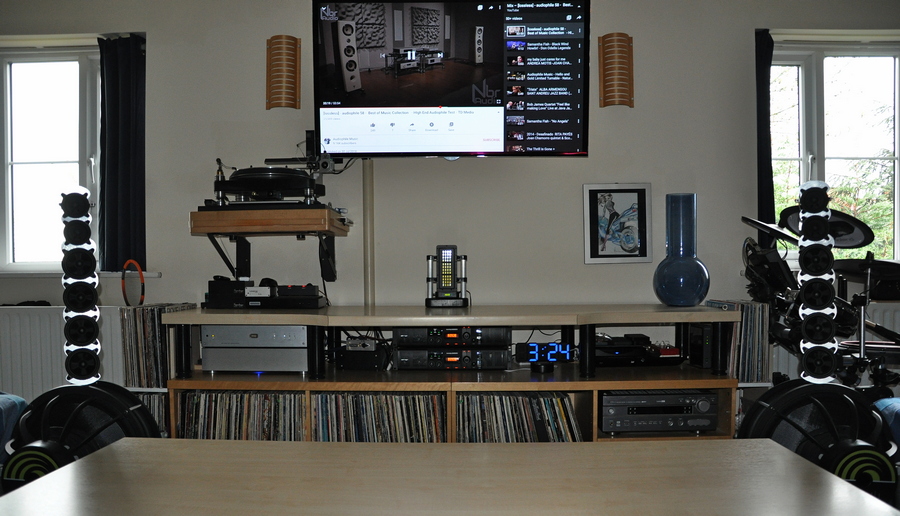 Not trusting my ears, I sent some 3" arrays to John to test. Something tells me I am not going to get them back

I should add I am rolling off output to the Faitals @ 200hz using the DEQX, but John is happily running them full range.
Also, the total cost of this array is about the same as a pair of PRVs!
Top

Yes, I am running with no crossover. However, they naturally cut off about 100.
I do not feel I quite got the bass right yet. I have to wait till I get a spare USB cable to get into the Behringer settings. At the moment I am having to adjust volume settings on the Behringer depending on the recording by one notch that works out + or - 2db
They are certainly staying in the system.
Top
Post Reply
98 posts