Subjects that don't have their own home
Post Reply
703 posts

When I was sixteen I got a Saturday job at a motorbike dismantlers...actually it was a rented house in Swanscombe, run by a Mr Saun Kent, who happened to be a Kent chapter Hells Angel.
Many a story to tell, but this is a family forum, instead I've dug out this pic.....rather than being paid in money I was paid in motorbike bits, and over the months I gradually put this bitsa abomination thing together...

I never actually got it on the road, and after my A levels I flogged it and went off to Uni, and stayed away from bikes for a good 10 years or so....

So back in the mists of time, for my 29th birthday I got myself this 750cc Meriden Bonnie.... Thats a cool thing to build whilst you're still at school MrT, top marks! Is it actually leaning against a tree?
"One pound of middle cut pork leg joint,
Stew my foot and call me Brenda".
Top


ISTR the side stand I put on it made it lean over a bit much...
Obviously it was a cool scratch build from bits and pieces with the only minor drawback of needing to be parked leaning against a tree....
Actually a block of wood under the sidestand worked too...
Top

Ha! Must've been awkward having to only find places to park that had a handy lean-tree facility!

So, remember that brand spanking new RD350 YPVS looking all shiny and lovely in Ma + Pa's back garden purchased straight after getting a 'full' motorcycle license?.... well, within a month of passing my test an older and much more experienced motorcyclist mate asked me if I wanted to go on a holiday, touring on motorbikes? Being young and daft I said "Yeah, sounds good, wherever you fancy."

He came back a few days later..."I've got us lined-up on a European Motorcycle group tour ...", how he did this I don't know. "Errr, OK, where we going and when?" I asked..... "Viana Do Costello (sp?) on the Portuguese Coast in a few weeks time so get some panniers and some miles in "...

Now, there's a few things to be observed here.

What could possibly go wrong? 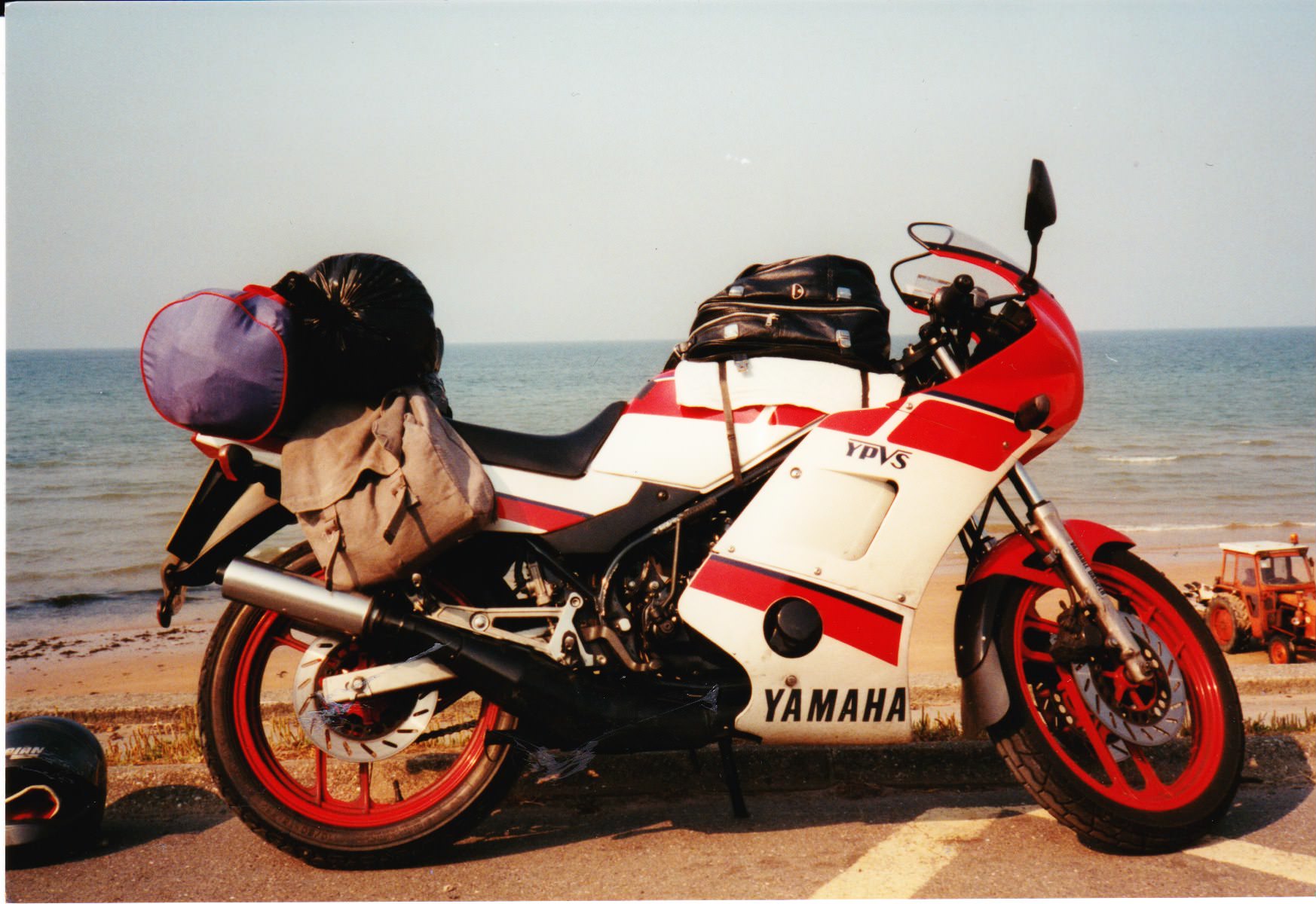 So, mate and I met up with the group (who I'd never met before) somewhere on the way to Southampton I think (which at that time was the furthest I'd ever ridden in a day anyway) and I started noticing I'd done things 'differently' to these grown ups and verterans of motorcycle touring Eg:- they had mostly BMW's and Honda Goldwings with trailers on. I had a few Tee shirts and jeans but had to make space in the (ex-Army Surplus) throw-over panniers for lots of fully synthetic 2 stroke oil, doh....that was the other thing...they weren't riding 2 stroke whizzersbikes! They were a welcoming bunch if a little concerned. I was young and daft, did I mention this before?

Off we went, onto the ferry, got off somewhere in France, rode all the way down through France, then over some Mountains (through Snow) into Spain then right across Spain into Portugal to the coast.

Boy-o-boy did I learn a lot on the way there.

The group split into much smaller groups, I seemed to get on well with a fella who rode a big single cylinder trail bike (a kindred spirit also with 'minimalist' touring clothing and not-sensible bike) and another fella who rode like the clappers on a red Moto Guzzi. They turned out to be a very funny Artist and an Amateur Racing motorcyclist, we got on very well, rode as a trio and laffed a lot and they taught me so much on the trip down about riding after I explained my novice rider status. They couldn't believe I'd got onto/ 'talked' into the tour and what a funny choice a RD350 was but were very supportive of me and I let them know I was grateful. They taught me stuff I didn't know about to get through the test (!)like lines through corners, when to brake, when not to brake, what a power-band was, the differences between 2 strokes and 4 strokes and lots of other stuff all on the way down to Portugal. It was an ace education. By the time we got to the destination I could confidently grind the footpegs, the panniers and anything else that was hanging off. I went fast, faster, more fasterer and encountered my 1st ever speed wobble bombing downhill fully loaded. Livin' n learnin'. As a trio we overtook a lot of the more 'experienced' tourers, we were on-a-mission, I was learning fast. There was probably shaking of heads from the grown ups....

We got to the destinantion, ate, drank, partied, ate, drank, rode and after a week or so had to head back. We split off into our little trio again and headed up into the mountains outside Braga, cor !....fast swoopy bends, sheer drops, amazing views, road surfaces that changed a lot. I was enjoying this a lot.... we were gonna get home to the UK 1st......whaaaaaaaaaaaaaaaannnnnnnnnnnnnnnnnnnnnnnng went the engine on the little RD350.....the other 2 were slowing, "I'll take 'em on this bend....that'll learn 'em...." 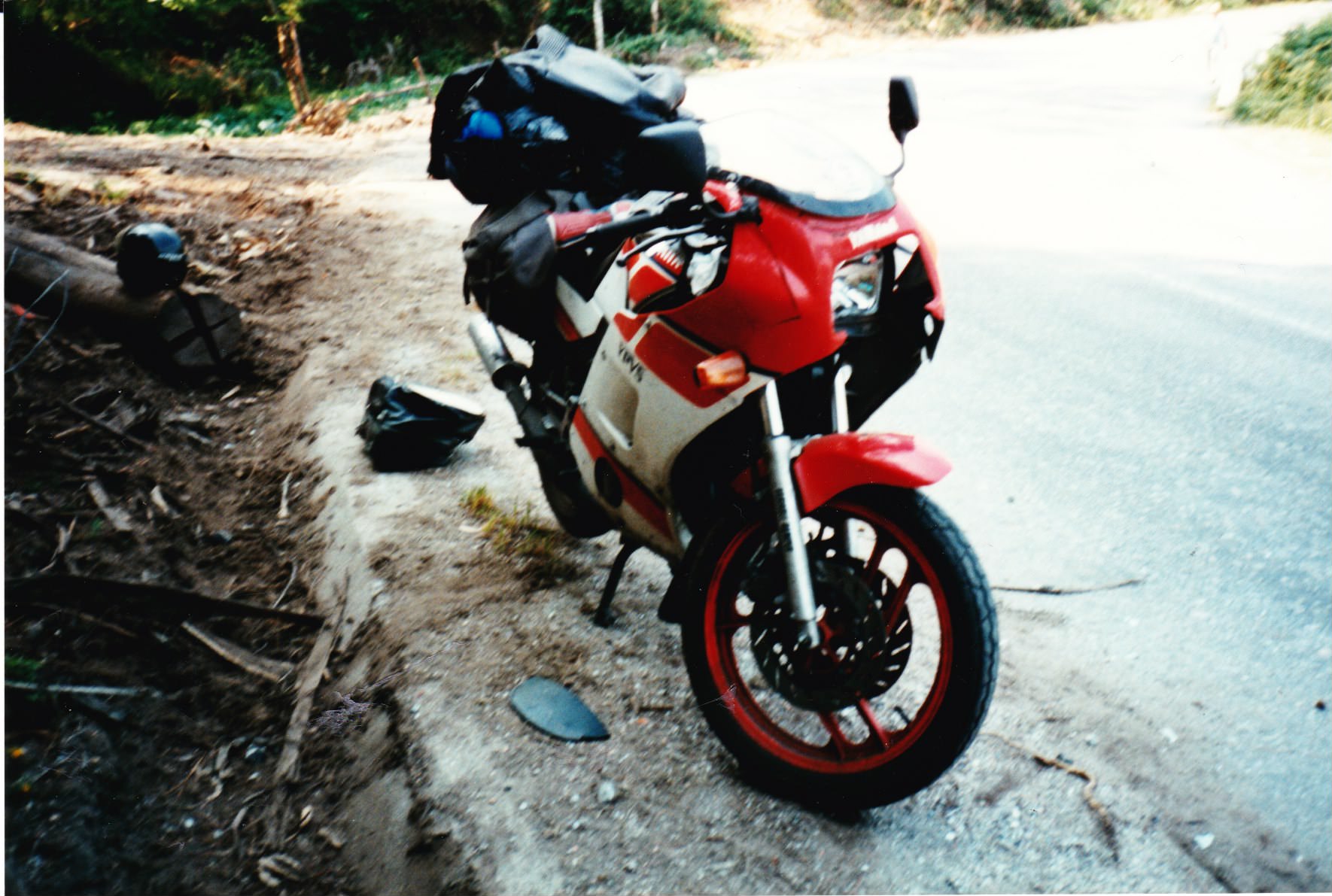 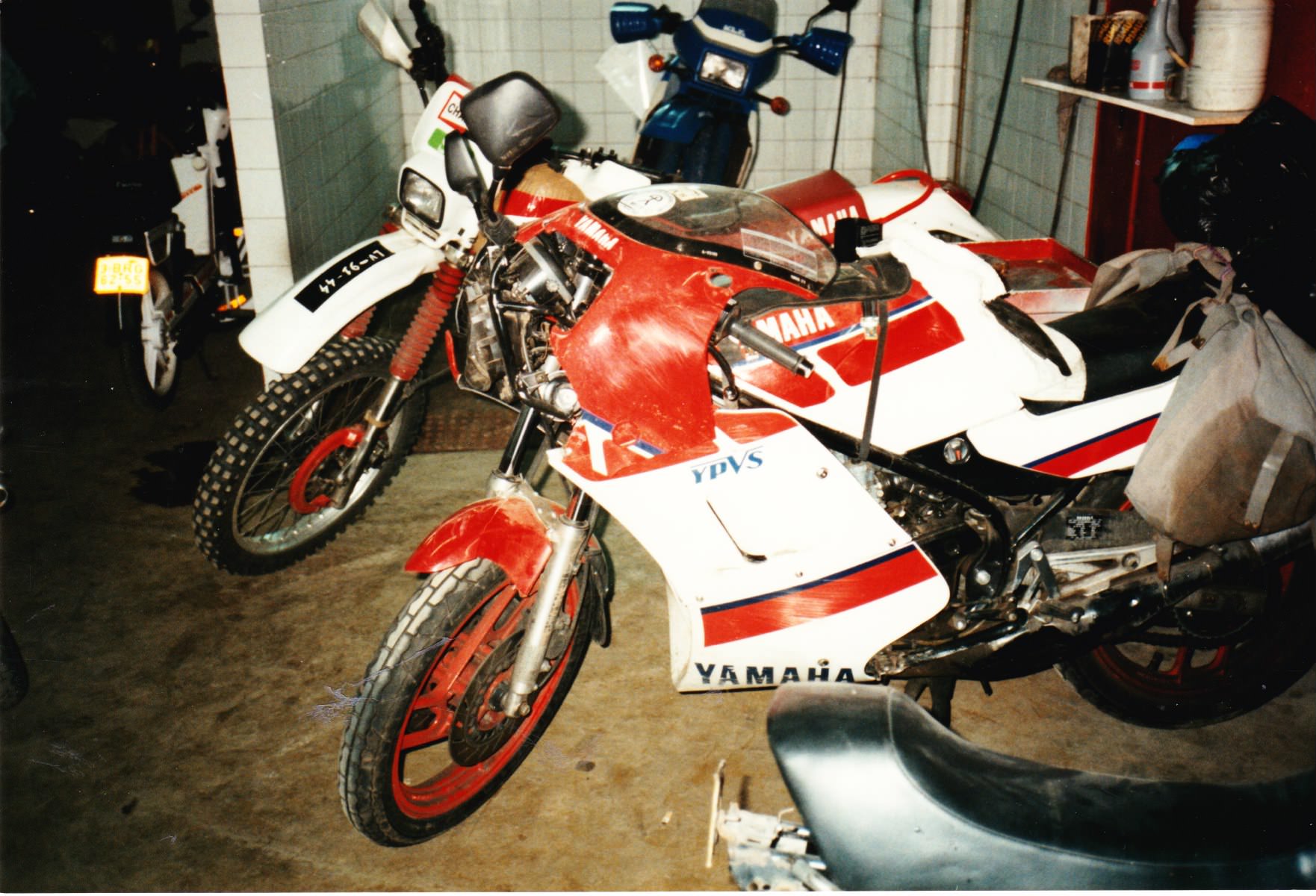 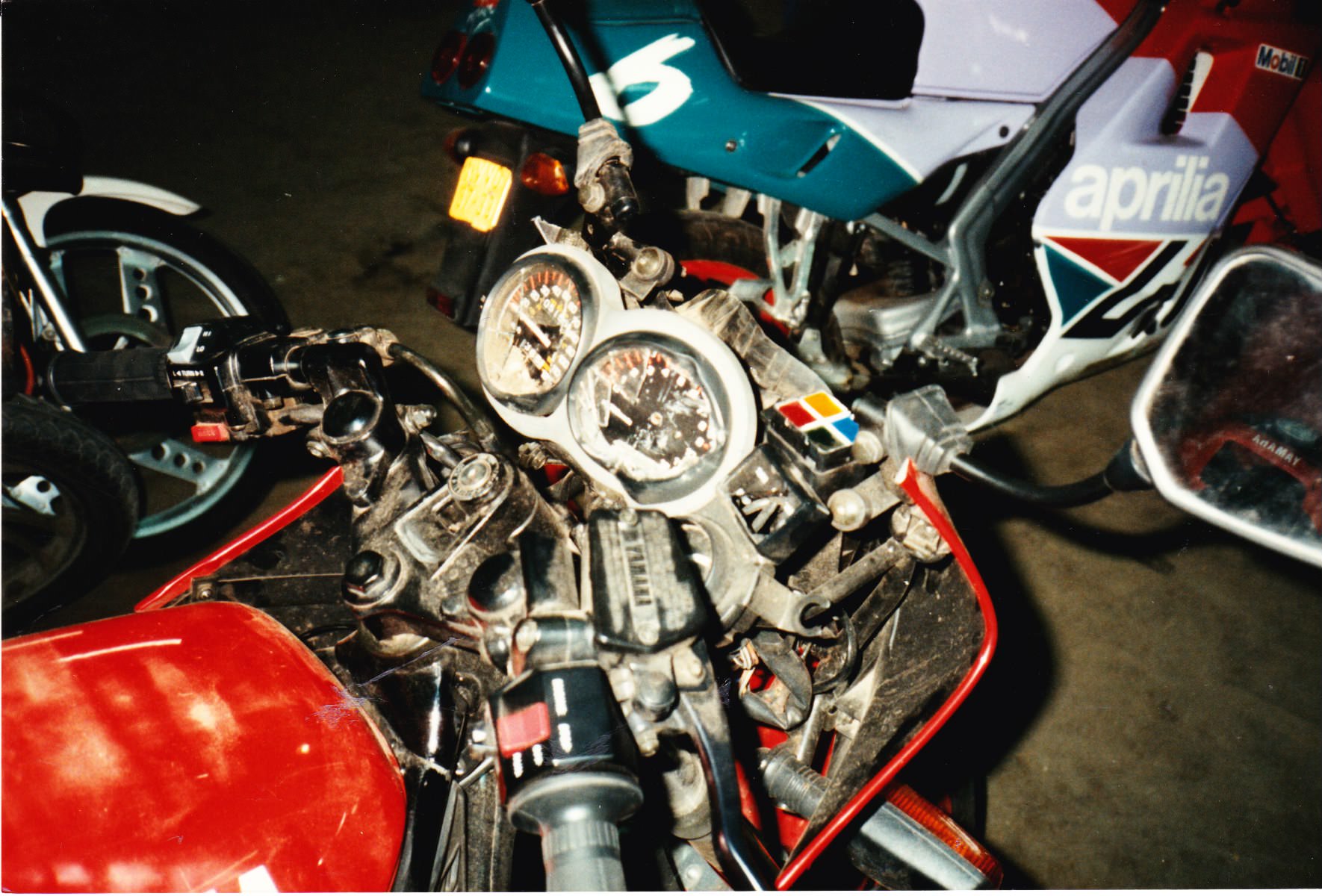 They'd slowed because they were more experienced than me and could see the bend tightening, I did schoolboy error and dabbed the rear brake and (I'm told) lost grip then low-sided down the road and slid into this tree ... 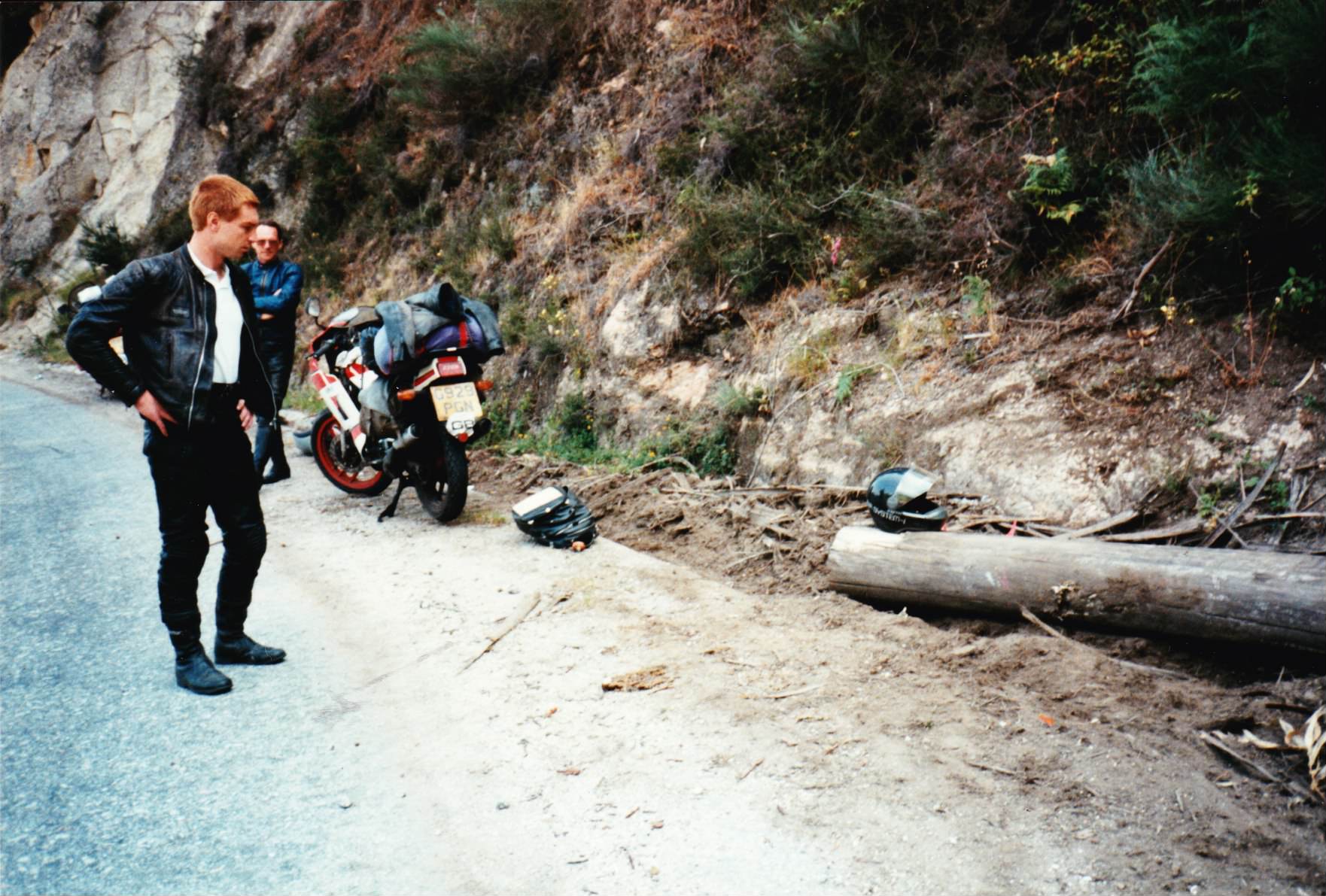 flipped over it and both me and the bike slid up the mountain face leaving that comedy scratch patch in the chalk.... 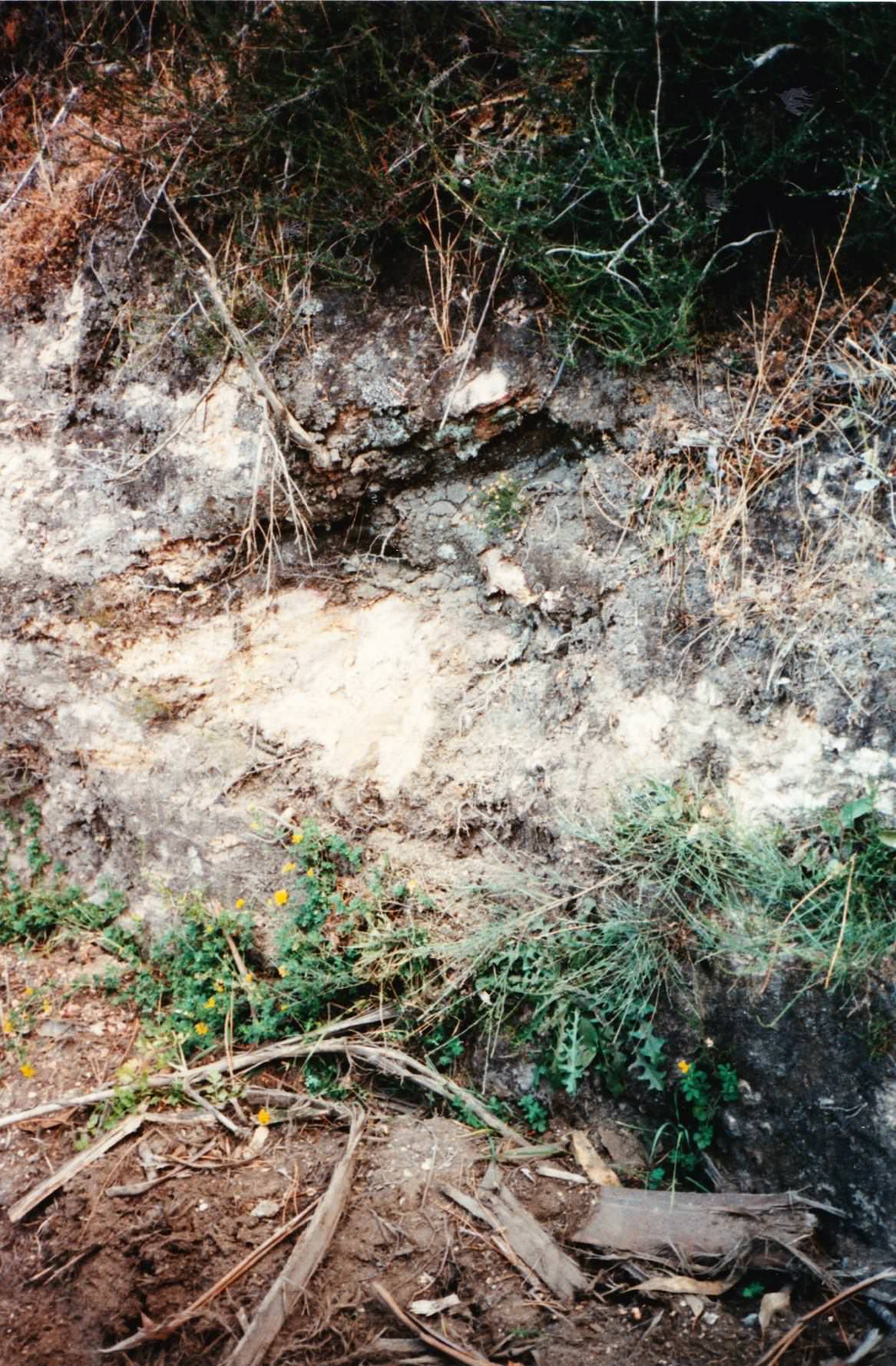 I was knocked unconscious, I still remember to this day coming around face down in the road and the 1st thing I did was wiggle my fingers to see if I could still play Bass, no really.

The bike was a write off, frame and forks bent, I was young, lucky and light and very flexible and only wrenched shoulder muscles. I got taken to Hospital in Braga for some checks where the E111 got me seen quickly and the super friendly Doctors and Nurses discovered I was the only English fella who didn't know anything about "Phoooote-baull?". They strapped up my hurty arm and shoulder after X ray's and prod's and I put myself into a hotel for the night whilst I sorted a flight back home. Within 2 months and 26 days I'd passed my test, bought the bike, traveled across 3 countries and crashed.

Thus ended my like of motorcycling. "I'm sticking to 4 wheels from now on....".

Great story DTB and glad you survived in one piece

Ta gninnam , it was a 'learning experience', if a trifle expensive

steve s wrote: ↑
Thu Jan 18, 2018 8:33 am
The photo attachment is easy the but I stuggle to find a way to get rid of the pixels sufficiently to attach.. I only use my phone for pics and browsing
I'm not using host for picture storage
Any help for me too?

Wow that's an interesting looking bike- mind, the ride looks like it could be a bit harsh!
Interesting technology though, inline four with shaft drive? and a sweet looking little thing to boot. The telescopic forks suggest it's post war, but, err what is it?!
Top

A Scott maybe? or a velocette(like a Noddy bike without it's clothes on)

I was visitng my eldest in Biggleswade in the summer and went for a walk down by Jordans Mill. Waddya know! there were about 30 of the Scott jalopies in the car park at the mill, must have been a concourse or something..

so what is the collective noun for lots of Scotts?
Last edited by ed on Fri Jan 19, 2018 9:08 am, edited 1 time in total.
There's nowhere you can be that isn't where you're meant to be
Top

Nice bike there baggs, .don't see too many Nimbus bikes around...
The tube manual is quite like a telephone book. The number of it perfect. It is useful to make it possible to speak with a girl. But we can't see her beautiful face from the telephone number
Top

don't think I've ever seen one...wow
There's nowhere you can be that isn't where you're meant to be
Top

Phwoooaaaar! Hello Balthazar, tell us a little about yerself!

Looks a little Sunbeam S8 ish which as eni fule kno is the 2nd bestest motorbike of all time (innits).
"One pound of middle cut pork leg joint,
Stew my foot and call me Brenda".
Top

so what is the collective noun for lots of Scotts?