Yeah me too lol, it's a lot of money.

You must be getting excited trousers !
"The bass is the king of the instruments - it has no known natural predator" (Wobble)
Top

Tried it some years ago; didn't find it anything special and settled on HQ Player as my player software of choice.
Top

Yes, but not often as you really need 16Gb RAM for any of the more interesting options. When I do -not subtle. And that's coming from Mr Cynical here.
'"That'll do," comes the cry of the perfectionist down the ages.' (James May The Reassembler)
Website www.wodendesign.com
Community sites www.frugal-horn.com & www.frugal-phile.com
Top

You must be getting excited trousers !

I am! Got a dead keen jumper as well.

Yes, but not often as you really need 16Gb RAM for any of the more interesting options. When I do -not subtle. And that's coming from Mr Cynical here.

What does it do with those 16GB? We may be getting used to large amounts of ram, but that’s 2 hours of 32 bit stereo 384k samples a second audio.
Resistance isn't futile it's V / I.
Top

I am really interested to hear how you got on with your visit to Vic Ali.
After hearing what Vic achieved I have gone down a similar route. However, with my bass drivers, they only go down to about 30hz. Vic can go subsonic and I wonder did he demonstrate that to you.
Vic has done an awful lot of research using different bass drivers and approaches to get to where he is.
Top

First of all, thanks are due to Vic for hosting me and allowing me to listen to his creations. I've pointed him in the direction of this thread (and AT in general as I don't think he spends a lot of time on forums)

Long version - Vic took me upstairs to his living room, quite a large space, around 30ft. by 15ft. so room for speakers to breathe. We had a chat about the construction of the speakers and the various earlier iterations that are scattered around the room. Some photos below, but basically he uses some miniature scaffolding parts from a company near Huddersfield I think it is - total cost for all the parts and for them to cut the tubing to length was £99 delivered, so a bit of a bargain there. I'll try and find a link. The bass drivers are bolted together facing each other using some spacers of around 4-5", and hang in a cradle of the scaffolding supported by some small loops of cable. This seems to work really well - I checked to see if any vibrations were making there way from the drivers to the scaffolding and couldn't really detect anything, so this arrangement appears to work really well. The PRV mid/top drivers are hung from a U shape bracket, again with a loop of cable under the top drivers' magnet. Vic made some fish plates, more or less the shape of a dog bone to connect the four drivers together, all just hanging there from the top driver. The weight of the drivers keeps them steady. They are connected series/parallel a la Edingdale stylee.

It was all digital files we listened to, one particular track that struck me was a live version of Man/Machine. I can honestly say I've never heard a speaker in a living room get closer to how a live gig sounds ( or at least how I imagine it would sound not having been there). The scale, dynamics and sheer drive to the bass has to be heard to be believed - I've certainly never heard anything like it in a living room, it really is like being at the gig. The funny thing is though, the bass is in no way overblown, nor does it interfere with the mid/tops in any way, it's just there when it needs to be, and boy is it there! As Vic commented, you can't really appreciate music like this until you hear it with the full frequency range reproduced, and having now heard this for myself, I have to agree.

The 4" PRV drivers appear to be quite a bargain- I think they are around £75 each?

Mids and tops were very well reproduced, huge soundstaging too. Very clean and clear, and I didn't miss a tweeter at all.

Further details - The bass drivers are crossed at 275hz to suit the PRV drivers, using the DSP in the Behringer amps. I was surprised to learn there is no DSP used to tweak the low bass response due to the lack of baffle, these drivers are so capable that none is required - I can certainly vouch for that. Only caveat is sensitivity is not great, but as Vic again commented, watts are cheap - he's using a couple of 6000w NX Series Behringers which he paid £300 each- all he does is up the gain by 10db to match levels with the PRV's. Other than that they are run open, as I believe are the PRV's - they are run with a pair of Temple Audio boards, powered with a pair of supercap power supplies.

Well that's about it, I'm sure Vic will correct any inaccuracies, just like to say thanks again, it was a pleasure to meet you. My plan now is to copy the bass side of this and use it with the Bastanis mid and tweeter. 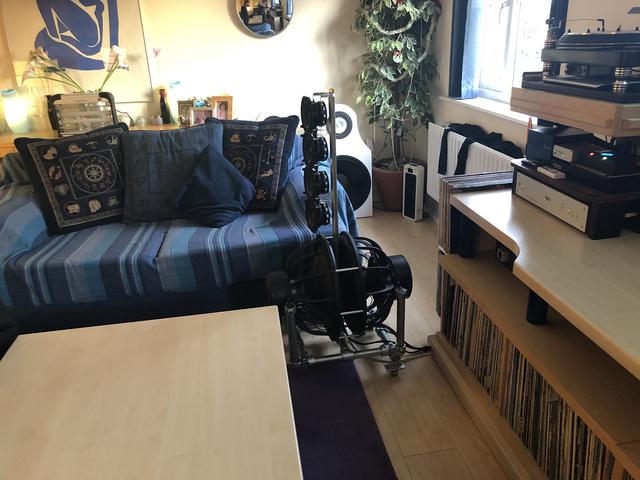 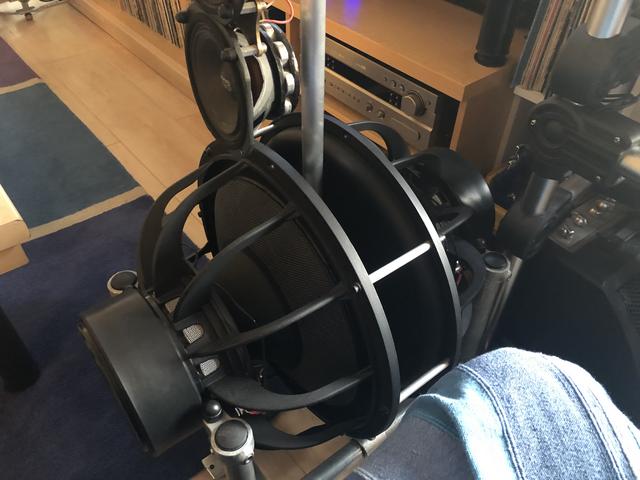 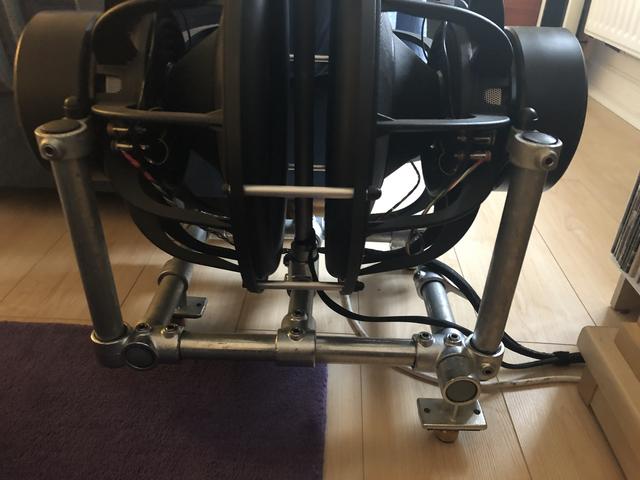 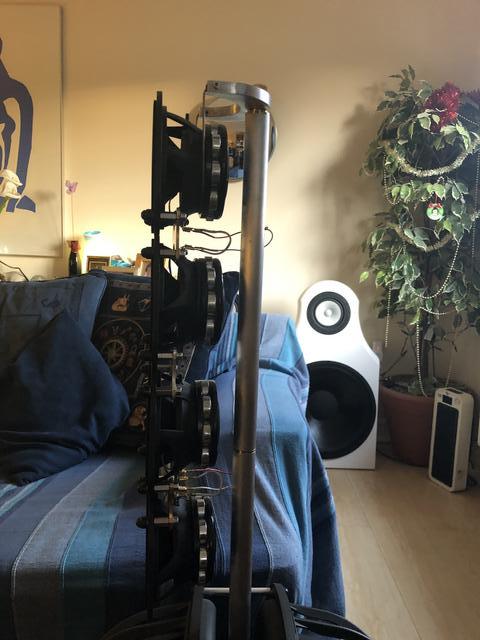 Great to meet you Ali.....appreciate you making the trip!

I have to say my speaker journey turned up a few surprises.....discovering things sounded better without any baffle was a revelation, and the design evolved from there.

The UM18's turned out to be a revolutionary step from the 15's. I never imagined bass could sound so good and integrate so well. As you say, difficult to describe the sound until you hear it. Not having done any changes to the speakers now for around a year, I think I am pretty happy with them and can start to listen to the music now.........
Top

Thanks for the report Ali. I'm going to tell myself that my 3.5m square room is too small for those 18"ers. Vic suggests 15"ers aren't in the same league so not sure what real options I would have. Are you thinking of 18s then?
Top

Ah, Vic's posted since. If I might ask Vic, have you tried the big 18" versions in much smaller rooms than your own living room, and if so how did they fare? How much space from walls do they need?
Top

Well given I’m already using a single 18 in a smallish room, I think they’ll work ok.

Very interesting. Thanks for the report.Can we have more information and close up pics especially about the "hanging mechanism" ("The PRV mid/top drivers are hung from a U shape bracket, again with a loop of cable under the top drivers' magnet. Vic made some fish plates, more or less the shape of a dog bone to connect the four drivers together, all just hanging there from the top driver.") ? Are there construction plans that could be published?
My excitement about using Behringer amps is limited but there are class D amps that sound more like tubes (adding some harmonic spectrum similar to tubes). Does it really need 6000W amps? And the fans in those Behringers are not silent enough for home use. I used for a while a Behringer in my AV system and had to disconnect the fans. The sound also changed to the better when I replaced the Behringer with a Cary CAD 120S.
Top

Are you thinking of more of the same 18"ers Ali, or swapping to the Daytons?
Top
Post Reply
85 posts